Home >> From clay to oak barrels … the origins

From clay to oak barrels … the origins

The reason we started aging wine in oak barrels in the first place was not intentional, but the result of a happy accident. For millennia, the clay amphora was the storage medium of choice for transporting wine. 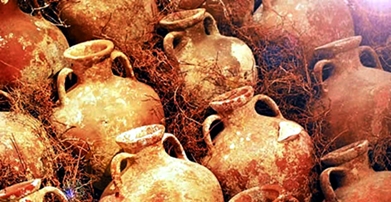 More than two millennia ago, when the Romans began to spread their empire around the world, they wanted not only to carry weapons and food, but also wine. Wine was safer to drink than water, still supplied calories to malnourished troops, and of course relaxed the soldiers with a heady hum. For a few thousand years, starting with the ancient Egyptians, clay amphorae were the way armies (and merchants) transported wine over long distances. There were other civilizations, especially in the Mesopotamian region, that used palm barrels, but this was an exception rather than a rule. While palm barrels weighed much less than clay amphorae, palm wood was rather difficult to bend. Clay offered another advantage in that it was airtight if properly sealed, although this was a challenge.

The practice of using amphora continued in the Greek and later in the Roman Empire. As the Romans advanced north into Europe, and away from the Mediterranean, the transport of clay amphorae became increasingly difficult. While the Romans were aware of palm barrels, the price and difficulty of bending wood made it a poor choice. When the Romans met the Gauls, they found a group of people using wooden barrels, often made of oak, to carry beer.

The Romans quickly realized that they had found a solution to their amphora question. While other woods were used, oak was popular for several reasons. First, the wood was much softer and easier to bend in the traditional barrel shape than palm wood, so oak only needed minimal toasts, and a barrel could be created much faster. Secondly, oak was abundant in the forests of continental Europe. And finally, the oak, with its tight grain, offered an impermeable storage medium. The transition to the wooden barrels was rapid. In less than two centuries, tens of millions of amphorae have been discarded.

After transporting their wines in barrels for some time, the Romans and other societies after them began to realize that oak barrels gave the wine new and pleasant qualities. Contact with wood made the wine softer, and with some wines, tasting was also better. Due to the minimal toasty of the wood, the wines developed additional aromas such as cloves, cinnamon, allspice or vanilla, and when stored longer they had additional flavors such as caramel, vanilla or even butter. As the practice of using oak barrels for transportation continued, merchants, winemakers, and armies found that the longer the wine remained within the barrels, the more qualities of oak would be imparted to the wine, and thus began the practice of aging. of Wine in Oak.